The asbestos-free certification provided by overseas manufacturers can be wrong.

Any product found with any level of asbestos is prohibited from being imported and used in Australia. Importers must ensure they do not import asbestos into Australia.

Some countries still use asbestos in manufactured products and may classify goods as ‘asbestos free’ because they only contain low levels of asbestos content.

The asbestos-free certification provided by overseas manufacturers can be wrong.

Importers should be fully aware of the varying definitions and standards applied in the country of origin and/or supply and should:

Where an intention to lawfully import samples for Australian testing exists, the samples must be from the goods actually being imported. Direct supervision and documentation of this process in the supplier country will assist in reducing doubt as to the source of the samples

The cost of any tests or verification measures undertaken will be borne by the importer.

Australian regulations apply at the border.

The Department of Immigration and Border Protection has important information on their website regarding prohibited and restricted imports which includes all forms of asbestos.

If you have imported building materials from a country where asbestos is legal, then you should have the material tested before using it in construction.

it is recommended that you use a NATA accredited laboratory accredited for AS 4964 Method for the qualitative identification of asbestos in bulk samples, or an overseas laboratory with the equivalent international accreditation.

In October 2015, a builder ordered fibre cement sheets from an international website.

The builder has since constructed his residence using the asbestos containing fibre cement sheets.

Upon completion of construction a number of sheets remained and were sold online. The recipient of these sheets ordered NATA accredited testing of the sheets which identified presence of asbestos.

The builder was ordered to engage a licensed asbestos removalist to remediate the site and remove the remaining panels. 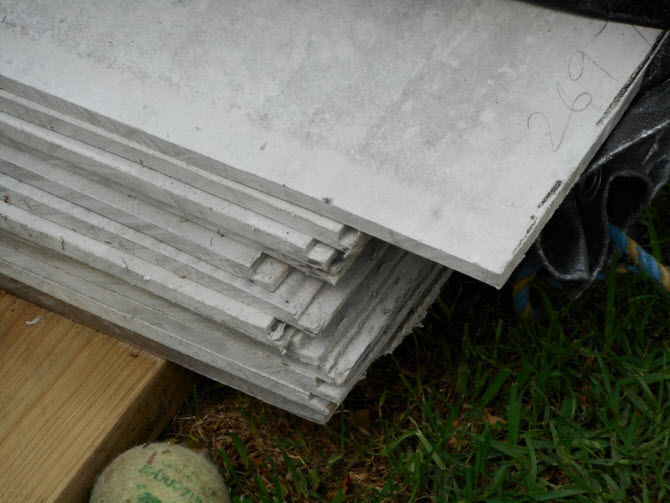 In August 2015, Inspectors issued a prohibition notice to a building site in Sydney, following the discovery of asbestos in fibrous building panels imported to construct a residential building.

The expanded polystyrene (EPS) panels were imported from China and were thought to be asbestos-free, but subsequent testing by the National Association of Testing Authorities (NATA) has shown they contain chrysotile asbestos.

The panels had been cut, and therefore significantly damaged on-site. The builder was ordered to engage a licensed asbestos removalist to remediate the site and remove the remaining panels.

The Asbestos Safety and Eradication Agency issued a consumer/retailer alert about these crayons.

Following the testing of spare parts, new vehicles imported from China were found to have asbestos gaskets in 2012.

As well as imported new vehicles many older vehicles manufactured before January 2004 contain asbestos in brake, clutch linings and gaskets.

We published a safety alert about asbestos in vehicles.